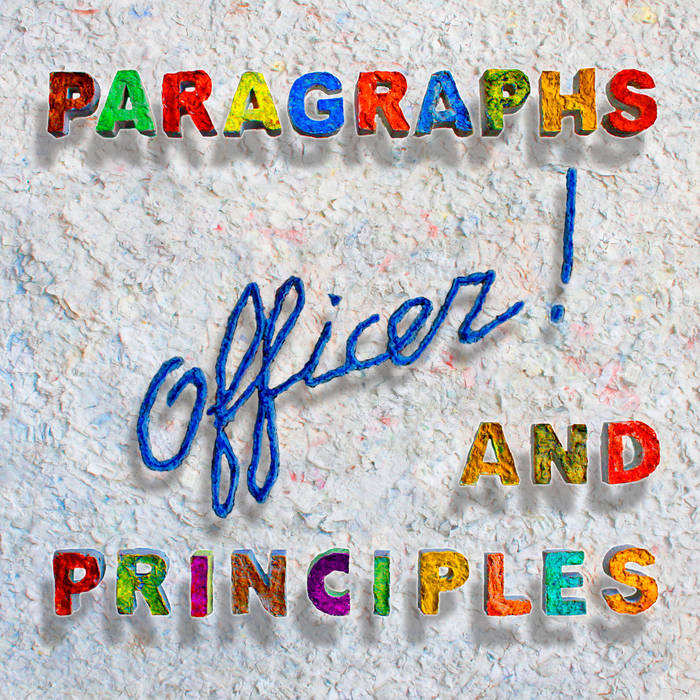 Officer! was founded by Londoner Mick Hobbs. His roots were in the Rock In Opposition scene of the late 70s and early 80s. Initially he worked as guitarist in The Work, subsequently he became closely associated with This Heat and their Cold Storage Studio in Brixton, working with artists like Family Fodder, Catherine Jauniaux or Zeena Parkins. The band's first album "8 New Songs By Mick Hobbs" came out in 1982 on casette only. It was followed by the second album, "Ossification". "Paragraphs and Principles" is the most ambitious album yet by the experimental, maverick pop group Officer.! The band has surprised itself with this dazzling yet almost dangerous collection of pieces that keep alive the glorious memory of composer Cornelius Cardew – comrade and champion. His work, while of its time, remains strangely contemporary. It is difficult music – mystifying perhaps, idealistic certainly, and contentious without doubt. That said, Cardew was also drawn to rousing, goose-bump melodies that wear their politics on their sleeves. Since his untimely and sinister death in 1981, the world has come full circle and Cardew’s desire for rebellion, democratisation, rejection of crass popularism, and a revolution in politics, thought and approach have all become relevant once more. Officer!’s tribute to Cardew features several dynamic re-interpretations of his key works, as well as new music that draws inspiration from his principles and philosophy. For this outing, Officer! is Mick Hobbs, Felix Fiedorowicz and Bill Gilonis alongside a stunning line-up of 30 performers from 8 countries. No one knows quite how this project came about – it’s almost an international conspiracy, and certainly a closely guarded secret. We hope only that upon their unleashing, these fierce new sounds may be heard by as many ears as possible.