It Doesn't Matter Where It's Solstice When You're In The Room 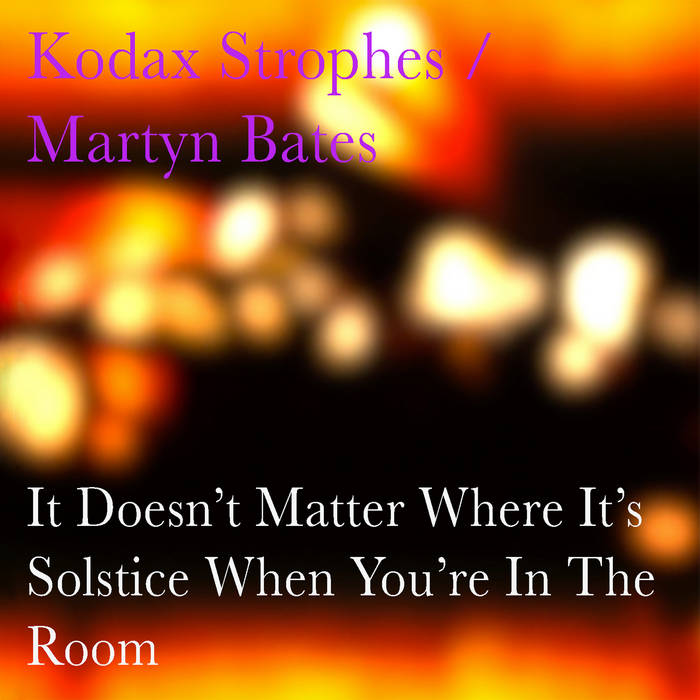 Martyn Bates is an English singer, musician and songwriter. After releasing tapes of experimental, industrial music as Migraine Inducers he formed Eyeless In Gaza with Peter Becker in January 1980. The duo became known for their unconventional instrumentation and arrangements, and for Bates’s passionate vocals. From 1992 onwards, Bates has run a parallel career recording and performing with a re-vitalised Eyeless In Gaza – with Eyeless deftly blending song with collaged soundscaping - while Bates otherwise continues to develop his own intense and possibly autobiographical solo work. Kodax Strophes is all about him wanting to make something wide-screen and filmic, kind of unhinged, and yet painterly – aleatoric, yet not absolutely, definitively so. It turned out to be an often sparse canvas, with lots of raw, ambient, found sounds … something quite different from “song”, and yet still lyrical/pastoral. Music for emptying dreams, music to free-associate by. Kodax Strophes is in a way where Martyn Bates originally began. Among the first things that he made for public consumption was the music he made in 1979/80 under the Migraine Inducers aegis. Quite key to Kodax Strophes is its filmic orientation - all the pieces were written and developed to ‘mess-aesthetic film’ images of Bates' own devising - i.e. they were conceived as being part musical, part filmic. The music also works well as a stand-alone.

If you like It Doesn't Matter Where It's Solstice When You're In The Room, you may also like: